\ Something to Defend – Re-Entry Skip to the content
Re-Entry

Since I no longer have care of a cat or a ten-pound dog, I am able to consider the finer qualities of the raccoons that live in close proximity to me. I looked up one day recently and locked eyes with a raccoon not ten feet from me, poised in the branches of the venerable cherry tree in my backyard. The two of us stopped and stared at each other for what seemed like a brief eternity but was probably no more than thirty seconds. I noticed that the raccoon’s face was open and lovely—an almost human face. I thought, It’s fine that you’re there, and then I turned and went inside. When I came out again a few minutes later, the raccoon was gone. I was sorry.

This was a radical departure from my reaction to seeing a raccoon in that same tree a couple of years earlier, when I still lived with a toy poodle—who would have been lunch for any raccoon. Then, the raccoon was a predator, a dangerous interloper, the potential murderer of a creature dear to me. I glared at that raccoon. I said, aloud, “Get. Out. Of. Here.” I went inside to look for a broom, anything to use as a weapon. When I came back out, the raccoon was still there. Eyeing me with seeming purpose, that little animal leapt further up into the tree, using what appeared to be opposable thumbs and herculean strength. It was like watching an Olympic gymnast—only this creature was stronger and more agile than any human I’d ever seen. Then, the raccoon came back down and, with perfect balance, sauntered along the top of the thin wooden fence that edges the back of the yard. He was leaving, but only because he wanted to. He was utterly relaxed.

I felt a little shaken. If I couldn’t intimidate this raccoon, what chance was Chou Chou going to have? Chou Chou is buried in my backyard now, his demise having had nothing whatsoever to do with raccoons. And today, I encountered a raccoon under entirely different circumstances—I was the one who was seen as a threat. I was on the walkway that cuts through the yard, headed for the post office, when I heard a light growling sound a few feet away. I’d already opened the gate, and I looked off to the side, where my impromptu fence meets the wall of the carport. There are some high bushes there, and peering under the branches, I could make out three little figures. One of them leapt out, ran onto the grass, and turned to face me.

It was a raccoon in full fight mode. Eyes fixed on me, mouth open and growling, showing her teeth, standing as tall as she could. There was fury in her eyes, and fear as well—but I don’t think the fear was for herself. I closed the gate, with her on the other side. I said, “I won’t hurt your babies,” and I turned and walked down the path.

I had a number of reactions. First, I was amazed at the courage of that little animal. I must be five times the size of a raccoon. I don’t have the claws, of course; I don’t have razor sharp teeth. But I am big, and that creature was willing to take me on anyway—just to defend her own. You have to admire that.

I had other reactions as well. I do not want a raccoon nest fifteen feet from my front door, no matter how noble the animals may be. Fortunately, when I got back, the family had decamped. The mother raccoon was probably thinking she didn’t want to live that close to me either. (God only knows what she thought about me!)

Then I considered the striking difference in these three encounters. It was all about having something, or someone, to protect. The feeling that our loved ones are at risk brings out the warrior in us all. I find this a disconcerting thought when I consider just how much everyone in America feels is riding on this next election, how little any of us trusts the process by which that election will be determined… and what we—human beings—might be driven to do to each other as a result. Just to defend what is dear to us. 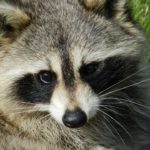