It was a Sunday morning. I’d slept in, meditated, and gone into the kitchen to make chai—when I had the feeling I was being watched. At the sliding screen door stood a large grey tomcat. I walked over and he sat, looking up at me. I sat. I opened the door a crack, put my hand out, and he arched his head under my fingers, encouraging me to pet him, which I did.

I have adopted a number of cats in my life, and this cat was lovely; this cat had a presence. I, however, currently have a commitment to a toy poodle, and Chou Chou is no friend to cats. So, even while I stroked this feline visitor, I was thinking, I can’t take you in!

Fortunately, the cat wore a collar and a tag with a phone number on each side—not a local number, I noticed. I called one and got an office answering machine; I called the other and got voicemail.

A minute later, the dog came tearing out of the bedroom, barking in fury at this invasion, and the cat fled. Then my phone rang.

“Did you just call my cell phone?” a woman asked. I told her about the cat.

“Oh my God!” she said. “Where do you live?” It turned out that this woman, Janice Martinez, and her partner, Michael Greenfield, had been docked at the Langley marina the week before. Kitty had jumped off their sailboat the previous Sunday. “He’d never done that before,” she said.

They spent days looking for the cat—met the local vet, who tried to help; met the owner of Music for the Eyes, who said that if Kitty showed up, he would fly him home to British Columbia. Because, in time, Kitty’s owners had to move on.

“We’re on Orcas Island now,” Janice said, “but we’ll come back for him.”

I was explaining that the cat had run off again, when I spotted him sitting under the front of my neighbor’s car.

“Put him in your bathroom,” Janice told me. “It’s just for today. We’ll be there.” But it took me a few minutes to get together clothes and a piece of smoked salmon, and by that time Kitty had disappeared again.

When you’re looking for a grey cat, the world is vast and dangerous place, full of hidden nooks and deadly predators.

I had to leave a cat behind once myself. Turning a beloved pet into a stray because you cannot find him and you cannot spend more time looking for him and you don’t know what else to do but go on—it’s an agony.

I felt the pain all over again that day: searching my neighbors’ yards for that grey cat; calling his owners; leaving the message that I hadn’t been able to catch Kitty; that he was, once again, MIA.

I was going to the Langley Shakespeare Festival that afternoon and was due at a friend’s house at 4:15. Just before 4:00, Chou Chou and I, coming back from a walk, saw a large grey cat on the driveway. The dog started barking again, tearing up the drive—and, of course, chasing the cat away. I could hardly blame Chou Chou. He hadn’t been looking for Kitty; he hadn’t missed that cat at all!

But it gave me hope… and five minutes later, I got call on my cell phone. It was Janice. “We’re here,” she said. “We’re in Langley. Where do you live?”

Even knowing I didn’t have their cat, these amazing people had spent the entire day to come back for him! From Orcas, they’d sailed their boat to Anacortes, rented a car, and driven down the length of Whidbey Island in the hopes of finding Kitty—a North American shorthair they had adopted as a rescue cat and loved. A cat they loved. 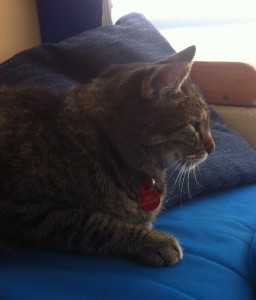 Kitty, back on his sailboat

I still had to go out, but I left Janice and Michael in my apartment—I would trust my life to people who went to these lengths for their cat! I told them I’d just seen Kitty; he couldn’t be far away.

And he wasn’t. This story has a happy ending. After an hour, they found Kitty, sitting in Island Church’s children’s play area, just over my back fence.

When I got home that night, I found a note that began, “We Found Him!” Janice went on to say that she thought Kitty had sensed “the energy” of my home. A meditator herself, she recognized certain signs of meditation in my apartment.

Later, when she sent the photo, she wrote that it was nice to read about Kitty’s adventure from my perspective, but what she and Michael most want to know is the cat’s story. What did he do in his week “living on the lam”? Because now that they’re home, it’s clear that Kitty has developed a bit of an attitude and a new taste for romping in the garden and woods. It’s probably the liberating effect of life on Whidbey Island but, whatever the cause, it’s brought permanent improvement to the cat’s life. Janice said, “I can’t imagine restricting him to a boat again.”

4 Responses to “A Visitor”