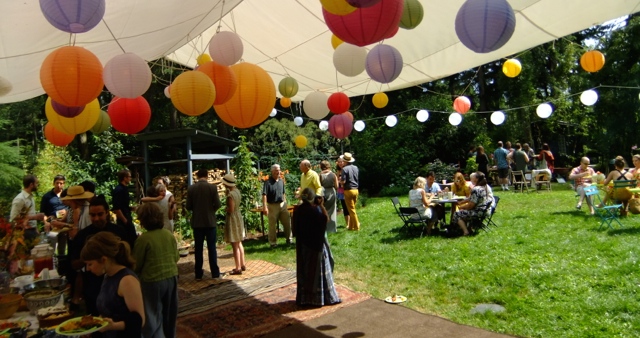 Photos by Kathy Rothschild: The thumbnail is the bridal couple.

You can’t always figure out why two particular people bond. Often they don’t know themselves. Last weekend I went to the wedding of two truly beautiful young people, who married at the bride’s parents’ home in a garden the bride, a professional landscaper, had designed and her mother and father—working hard—put in with their own hands: six-foot stands of sunflowers and double tiger lilies waving in the breeze, a humungous climbing monkshood, and masses of dahlias.

Rather than having a religious functionary take them through ceremonial vows, these two young people passed out flutes of champagne and, standing in the midst of seventy-five family and friends, spoke about their love for each other. They’d both grown up on Whidbey Island and hadn’t liked each other much in high school. “He had an air about him,” the bride remembered, “an annoying way of brushing the hair out of his face…”

They went to the same college; they found common ground; she cut his hair. One summer he went on an ill-advised bicycle tour through Nevada and while he waited for the air to cool each day, they talked on the phone—for hours. She wrote in her diary about how one day she’d like to have a life partner and “wouldn’t it be funny” if it ended up being him? Later, she wrote down the date when she knew she loved him.

And the bridegroom talked about how this strong young woman keeps his compass pointed in right direction and how, if he gets off kilter—as he has before and must suspect at some point in his life he might once again—he knows he’ll fight to stay close to her steadying influence.

It was a Whidbey Island event: pot luck appetizers and salads fresh from backyard gardens and the farmers’ markets, a whole pig roasted in a European-style imu, paella prepared by the mother of the bride in a huge pan over an outdoor fire, and a table laden with wedding cakes—some bought at the last minute by one of the guests when it seemed like there might not be enough.

It was such an auspicious beginning—how better to step into marriage than by stating, clearly and in your own words, your love for this person! And it shouldn’t end there.

I had been working in the library that day; a man spent the shank of the afternoon in the leather-bound chair in the library’s back room reading The Brothers Karamazov because he couldn’t be at home with his wife. She needed the space to grieve their daughter’s death from cancer. “She needs space from me,” he admitted. He said that he was Vietnam vet, on medication, someone who never “got over” what happened in the war. “It’s not easy to kill people,” he said, and later he added, “…but it was harder on my wife. They give awards to the soldiers for being in battle. They should give awards to our wives for what they put up with. They should have a parade for the spouses.”

“Tell her that,” I told him. “Take your wife out to dinner tonight and tell her that.” A few days later, he said with a smile that he had done just that.

In our culture, we’re so ready to express our negativities, so eager to tell people what we think they’ve done wrong. Sometimes that’s important, but what we need more of, I feel, is the kind of truth-telling that expresses our love.

That’s the way to honor the bonds we form with each other, whatever the circumstance, whatever our reasons may have been for coming together. 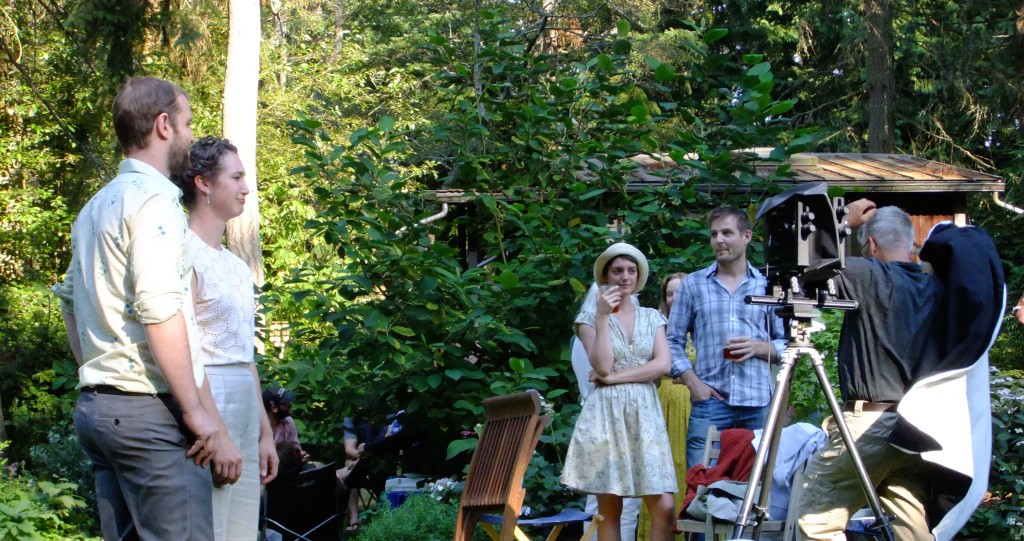 The father of the bride is about to take a formal wedding portrait.

One Response to “Coming Together”