It’s been a hard month. I’m not entirely sure why. A few weeks into it, snow fell, and I let that cold white blanket covering the ground keep me in my house for maybe four days. I had heat. I had food. I had work and entertainment. But I felt as if I were allowing myself to succumb, to lie down in the face of life.

Then mid-month, on Valentine’s Day, two people came to my door and left wrapped treats for me. It was like two hands reaching out—one of them holding homemade chocolate chip cookies and the other gaily wrapped chocolates. Have I ever mentioned my love for chocolate? At one point, when I was living in the ashram, my spiritual teacher observed that I came to the facility where she lived only when I thought I would be given chocolate. It’s not the way I would have put it, and what she said has always given me food for thought.

This Valentine’s Day, each of the wrapped chocolates had a legend inside. I’m a suggestible sort, but I usually rise above the maxims that come with candy. Somehow this was different. Twice I opened chocolates that were wrapped in the words, “Cross the line.” Even the first time I saw these words, they galvanized me. “Cross the line” could mean lots of things, but immediately upon seeing these words, I took a specific meaning from them. To me it was about stepping up to a challenge. So often I will do the needful, the necessary, but I won’t do it with the verve, the commitment, the passion that it takes to break a boundary. I won’t truly cross the line.

And then I looked around my house—was I stepping up to the challenge offered me now? There were piles of papers on my dining room table—all the paperwork from the taxes I hadn’t finished yet. The coffee table was messy as well—ashes from the last few days of incense, the coasters askew. The rug needed vacuuming. I hadn’t exercised that morning. I hadn’t been using the Water Pik at night; the extra five minutes it took to truly clean my mouth seemed too much to do. And I didn’t have food for breakfast the next morning. I’d been planning to make muffins, but I hadn’t done it yet.

What was it going to take to inspire me to support my own life with enthusiasm? To cross the line. I don’t know who said this phrase or what they had in mind with it, but for me, in the dark of this winter, it became a clarion cry to inspire me out of my sloth.

“Cross the line,” I told myself. So, I did. I finished my taxes. I vacuumed the living room. I made some muffins… and then, when friends stopped by with an extra helping of dinner or some dal a neighbor had brought them that they’d found they couldn’t eat, I had something to hand to give to them in return: homemade blueberry muffins. It’s a tiny thing, two muffins, but I could tell that, just like the wrapped chocolates and homemade cookies had made a difference for me, these muffins made a difference for two other people. So, it matters when we cross the line.

It led me to think about a time that was much, much worse for me than this month, a time when I truly felt like I wasn’t crossing any beneficial line. Let me tell you that story because it came up recently in a way that surprised me.

It was 1976, and I had been following my first teacher for a year and a half. It was my birthday, and I had, the previous year, come to the understanding that, as an ashram tradition, on your birthday you think in terms of what you can give to others and not what they can give to you. I was on a very pared back budget, saving so that I had enough to make the trip to India in five months, and I decided that the one thing I would do for my birthday was to make an offering to my teacher. I happened to be in town, and I stumbled onto a knitting shop, where there was some glorious yellow mohair yarn and knitting needles on sale. People made hats for my teacher, and, though I’d never successfully knitted anything in my life, I decided that this was within my budget and that I should do this.

This was something like two days before my birthday, and the night before, I was working on this stupid hat. It really was a stupid hat. Why had I thought that I should make him a hat. I had never made a hat before in my life. And this one was not working. Not at all working. I was going to stay up all night making this stupid hat…

And then suddenly I was exhausted. There was nothing more appealing to me than the thought of bed. I wasn’t going to be able to make the hat. It wasn’t even the right color. Yellow. My teacher wore orange or red. He didn’t even wear yellow.

So, I went to bed. I did not stay up all night knitting a hat—something extremely difficult for me to do; something I wasn’t even sure I could do—as a way of demonstrating my love for someone who had transformed my life in so many ways. But not in this way, obviously, and not in this moment.

The next day I woke up feeling terrible. At one point in the day, I was about to cross the street, and I saw that there were cars coming, one from each direction. “Let’s just see what fate has in store for me,” I said to myself. I stepped into the road, and I crossed it without looking again in either direction. Obviously I didn’t die. I didn’t get hit either.

That evening my teacher walked into the meditation hall resplendent in pale yellow. He was dressed in yellow from head to foot—exactly the same color and shade as the mohair yarn that was still sitting in my room. Had I been willing to cross the line, the hat would have been a triumph.

I got in the line for darshan, and as I moved closer to him, I kept seeing myself stepping into the road. I understood then that this particular form of crossing the line—crossing the road in that fateful moment—had been wrong, wrong, wrong. It was the act of a petulant child who was unwilling to live with what life was giving her.

When I got up to my teacher’s chair, I knew he would give me hat. He gave hats—the knitted hats given to him—to people who were celebrating their birthday. I could have not told him it was birthday, but I knew in that moment that I needed to offer myself. I bowed. I looked up. I saw the stack of hats on the table beside his chair, and as my eyes moved up them, the embarrassing thought formed in my mind, “Anything but the brown and orange one.”

The swami’s hand went for it, unerringly—the brown and orange one, the acrylic machine-made hat—and then it was on my head, pulled down over my forehead.

I wore the hat quite a bit that summer, going through some difficult moments. Having to scrimp for everything. Writing an article about meeting my teacher that was blissful to put together but was not well received. Being told by a poetry professor from Brooklyn College that this article was the worst writing he had ever read in his life (words that will be with me for the rest of mine). Being told in person by the glamorous Gloria Steinem that Ms Magazine did not want to publish my article…

But I did get to India, and the hat—machine-made acrylic that it is—has survived these forty-five years since. I think of it as the kind of garment that can last for five hundred years in a landfill. No self-respecting moth would touch it. But a year ago, at the beginning of the current pandemic, when I was feeling a need for extra support, I pulled out that little hat and I started wearing it to bed every night. The other day, shortly after I got up, my foot brushed something that was soft and radiated love. I could feel the love coming into my foot. I looked down. It was the hat. It had come off in the night and was on the floor. 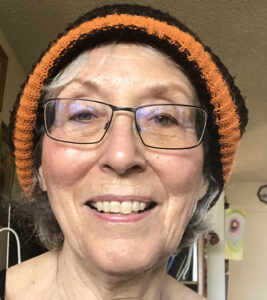 This led me to think that sometimes we don’t know what “cross the line” actually is. Sometimes when it feels like life is hard, just hanging in there is crossing the line.

4 Responses to “Cross the Line”