The Dark and the Light

Last week, I was receiving strong glimpses of my mind in vivid shutter frames.

A man is sprawled out on a chair in front of what I am told is U.S. House of Representatives Speaker Nancy Pelosi’s desk, his feet resting on her papers, his face set in bemused contempt.

An older woman shows up in this TV footage: a well upholstered body, a self-satisfied face. She looks like a grandmother, except that, in this moment, she is so clearly pleased with herself. She has done something. She has made a statement. She has shown up for a cause she cares about. She is doing her part to storm the U.S. Capital and stop these radical Democrats from stealing the 2020 presidential election.

I want to slap that silly, deluded smile right off her face. This is my first reaction every time I see this woman on my computer screen. She comes up in the news reports again and again and again.

And then there is a man who has painted his face in the colors of the U.S. flag—red, white, and blue—and wrapped himself in what looks like wolf fur with ram horns stuck atop his head. Seeing this image, my mind freezes. This man has demeaned not just a national election and congressional building but also pure, innocent forms of nature—animals incapable of mispresenting truth, animals that know no malice and have no agendas. This makes these beasts better than the both of us, this man and me.

I understand that my rage puts me on precisely the same level as that which I am raging against. We are operating at the same frequency, these sneering insurrectionists and I, the contemptuous political observer. I suppose the one difference might be that in sensing this parallel, I reach for something else.

I take a deep breath and remind myself that there is another way. There is Goddess Sarasvati.

In the spiritual traditions of India, Shri Sarasvati is known as the goddess of learning and speech, of creativity and the arts, of knowledge and wisdom. We are now approaching spring, which in India is the time of Vasant Panchami, a holiday dedicated to the worship of Goddess Sarasvati. This year it will fall on February 16. I think of Sarasvati as my ishta devata, my main god. Besides my spiritual teacher, Goddess Sarasvati is my primary focus of worship.

What should I tell you about Sarasvati? I have never seen her subtle form in my mind’s eye, but the various representations of Goddess Sarasvati that I have on pujas in my home show her as she has appeared to others in meditation. The goddess wears white, for purity. Like many Indian deities she has four arms—so much to do!—and in her hands she holds not weapons but implements of study and creative endeavor. A book, representing holy scriptures. A vina, a classical stringed instrument that makes heavenly music. A container of water for worship and to fill the most basic of human needs. A japa mala, a string of beads to aid in keeping track of the repetition of sacred mantras. Sarasvati’s gemstone is the pearl, which is a sea creature’s creative response to irritation.

There aren’t many stories about this goddess in the scriptures of India. The thought is that the scriptures themselves are expressions of Goddess Sarasvati, and she is not the sort to make a big deal of herself. There is one scripture, the Yoga Vasishtha, that contains an epic tale in which Goddess Sarasvati guides a supplicant, Queen Lila, through multiple levels of existence to the understanding that what she thinks of as her own life is nothing more than a flicker of thought taking place in one corner of sage’s dream. From this profoundly humbling revelation, Queen Lila experiences the ultimate truth of existence and, by the grace of the goddess, becomes Self-realized. As far as celestial adventures go, “The Story of Queen Lila” is quite extraordinary—like Shri Sarasvati herself.

The names of Indian deities are always highly significant. The name Sarasvati is in two parts: the word saras comes from sa rasa, which means “with essence,” and vati is “the one who embodies.” So, Sarasvati is the one who embodies the very essence—the sound in music, the flavor in food, the feeling conveyed in a dramatic presentation, the heart of life itself. Rasa has another meaning as well—”the life waters,” such as the sap of a tree. Those who remember Sarasvati with love experience the flowing beneficence of her inspiration and blessings, which are themselves experienced as love.

The most important thing to remember about Indian deities is that they each represent powers of the human mind. Goddess Sarasvati is within each one of us, and we can call on this divine power, cultivate this power, manifest this power in our own lives—as we wish.

When I think of Sarasvati, the word that comes to mind is numinous. It means “with awe and reverence.” After invoking the goddess’s presence, as I’ve done by describing her, it is this—a sense of the numinous—that I would now wish for our insurrectionists. I cannot think of them by any other name. It was, after all, my vote they wanted to throw out. But it isn’t just that they opposed me; it is the way they did it. In the film clips I could see that they lacked reverence, they lacked awe, they lacked humility. And this I would like for them to have.

You might notice that I’m not specifically saying they shouldn’t also experience pain. Some pain comes inevitably as a result of an indulgence in thoughtless and violent behavior. But I am not now wishing these people pain because I want to hurt them. It’s because they need to go through the consequences of their actions, they need to learn from what they have done. We would all benefit by their being in a more exalted frame of mind.

More importantly, I am benefitting from being in a more exalted frame of mind. I am no longer thinking, “Kill him.” The life-giving waters of love are flowing through my veins once again. I know Sarasvati, and I am at peace.

Whatever means works to bring you to this state, I implore you to discover it and to apply it as we move forward at this extremely difficult juncture. 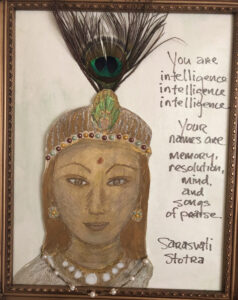