In the Art of the Mini Memoir class that I used teach in the local senior center, I would always bring cookies the first week. Then I’d ask for volunteers to bring cookies in the three weeks that followed. I’ll never forget the class where the first volunteer was a man I knew to be in his eighties. “But not cookies,” he said, “I’ll bring a cake.”

Right, I thought. He’ll pick up Sara Lee at Payless. But it’ll be fine.

He brought a homemade almond cake, the perfect size for the class, fluted so it cut into pieces easily—and it was delicious! I was thrilled with the cake. And, no, he said, his wife had not baked it; he had. I liked that cake so much that the next week he brought me the recipe… and he said he had an extra fluted cake pan, so gave me that as well. I bake in that pan probably once a month.

So, this was how I met Henry Tunes. Starting then, I saw Henry about once a month in writing groups for the next four or five years.

Over that time, I heard some extraordinary stories from Henry—about his travels to India and China, his collections of just about everything, his experiences as a high school teacher… I think my favorite of Henry’s stories was the time he bought and brought home a functioning windmill.

You could say that Henry resisted my suggestions regarding his writing. I’d ask him to describe a scene he was writing about, and he’d tell me he didn’t remember. Or he’d ask if people really wanted to know that much about it. Or he’d say he didn’t care that much about it himself. But then I realized that, bit by bit, Henry’s writing was becoming more descriptive. I reminded myself that this lovely man sitting in an armchair in my living room had developed his own way of communicating in his eighty-plus years of life. It was likely going to take him a little time to change.

From that same armchair, Henry once gave me precious feedback on my own writing. Once in a while, when attendance at this memoir group was down and we had time, I would read one of my own pieces. On this occasion I had written about Mrs. Kennedy, my teacher in fourth and fifth grade—“my all-time least favorite teacher.” At the end of this, I felt, vivid little essay, I wrote, “It’s been three-score years, at this point. I know, I truly know, that I must forgive Mrs. Kennedy. For myself I must do this.”

In his feedback, Henry gave me a stern look and said, “So, what have you done to forgive her?”

That stopped me. “Well, I wrote this,” I said. But then I realized that after identifying the need I have to forgive this woman, I had done absolutely nothing about it. Thanks to Henry, I brought Mrs. Kennedy into my spiritual practice then—dedicating some chanting to her—and I began to see that I was probably as much a trial for Mrs. Kennedy as she was for me. Something Henry, as a retired teacher, might know very well.

Henry’s daughter circulated the news that her beloved father was about to celebrate his ninetieth birthday (July 29, 2020), and this started me thinking about Henry.

Ultimately, besides his gigantic heart, the most important thing about Henry is that he keeps on learning. That’s how he stays young.

I’m not teaching that ongoing writing class anymore… and I must say that I miss Henry. 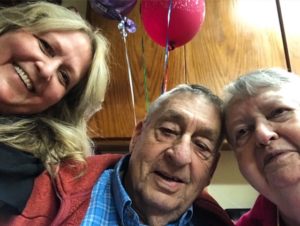 Henry Tunes is flanked by his daughter, Marina Tunes-Nichols, and his wife, Barbara. I think they’re looking at the birthday cake.