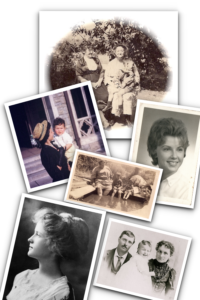 Some I chanted for, clockwise from the top: two of my great grandmothers, Mary Baright Dunsmoor (left) and Great Grandma Reeves, are with my father, George Dunsmoor at age four; a dear friend, Terry Shurig Farrier; another great grandmother, Grace Green, with my mother and her brother, Grace and Alan Green; Great Grandpa and Grandma Allen with my grandmother Florence at age one; my paternal grandmother, Margaret, at age sixteen; and finally, my mom again with my brother Geoff at his baptismal.

Pitru Paksha, the Hindus’ “time of the ancestors” was finished last week, but I feel that something has started for me that won’t ever end. That sounds ominous, and I don’t mean it that way. It was quite lovely to chant for people I care about who have passed on—the ancestors.

For the final chant, I wore a tiny silk scarf that Joan Szabo, the mother of a former friend, gave me for Christmas some fifteen years ago. I learned last week that Joan had just died, at ninety-two, and so I added her to the people I was chanting for. The scarf is a floral pattern in shades of blue that would have looked good on Joan’s fair coloring, and it’s a size that was in fashion in the fifties, when she was a young woman. I think she liked the scarf, and that’s why she gave it to me.

It’s no bigger than a whisper, so I’ve kept it through all of my moves because it reminds me of this dear woman, who once invited me to her cottage for Thanksgiving dinner because she knew that I couldn’t be with my own family. She was then about the age I am now. We both ended up leaving upstate New York, Joan to be close to a daughter I don’t know very well and I to come to Whidbey. We lost touch.

Until now. Chanting for someone is actually a very personal action, especially when that person has passed on. I felt the presence of the people I named in my little dedication, which became a bit more formal, a bit more like a sacred rite with each repetition. It also got quite a bit longer, as I kept adding people day by day. Pitru Paksha is sometimes called “the fortnight of the ancestors,” but it’s not fourteen days; it’s fifteen. And the way I did it—starting when the lunar phase began in the U.S. and ending when the lunar phase ended in India—it was actually sixteen days. I just wanted to be sure that this year I didn’t miss it, any of it.

The text I chanted is Shri Guru Gita. It’s roughly an hour of Sanskrit recitation. It begins with a namasankirtana—”singing the Name”—which is easy back-and-forth chanting. Each day after the first couple of lines of the namasankirtana, I would close my eyes and start making my dedication: “This chant is for my mother, Grace Green Dunsmoor; my father, George Baright Dunsmoor; my brother, Geoffrey Baright Dunsmoor; my uncle, Alan Green…”

This all started years ago with Uncle Alan. That’s too long a story to tell in detail, but the first time I sent blessings to Alan some twenty-five years ago, he was inhabiting a bleak astral space, and he jumped from there into my body right through the top of my head. There was a scary week then, during which I protected myself by chanting daily the very text that I this year offered on his behalf. All those years ago, I was finally able to obtain serious blessings for Alan, and since then he’s been in a good place. I used to say that this was the one clearly good thing I’ve done in my life: I was instrumental in rescuing a soul from hell.

During Pitru Paksha, one of the people I named in every chant is Mrs. Kennedy, a teacher who gave me a hard time in the fourth and fifth grade. This was very strong for me. After the second dedication, each day when I said, “Mrs. Kennedy,” I heard her say, “Oh, thank you!” and I felt such love. Also, I had a sense of her presence as I chanted; I saw that I had been difficult for her as well… and I remembered that when I was in Mrs. Kennedy’s class, I was given eyeglasses that did nothing to correct my vision. I realize now that I couldn’t see… and that this might have been a reason I had trouble in her class. She might have had reason to think I was slow. Through the process of chanting, I actually forgave her. I could feel it.

Early on in this holy period, I was fairly selective about who I named. I started bringing in Alan’s daughter, my cousin Joyce, because I knew he and my mother would both like that. Of course, I named my two grandmothers and my, to my mind, three grandfathers. But then I named only three of my great grandmothers. I didn’t know any of these women. I still don’t know the name of my paternal grandmother’s mother—I called her Great Grandma Reeves—but I was happy to chant for her; she looks quite jolly in her photographs. Initially, however, I consciously did not chant for Great Grandma Allen. She’s my maternal grandmother’s mother, and I’d never liked anything I heard about her. When Florence, my grandmother, was still a girl, her mother used to tell her that they didn’t need to worry about anyone trying to kidnap her, not with a face like that. And when she first saw my mother, she said, “What a homely baby!” What kind of darkened sight did this woman have that she would say such a thing to her own daughter and about her own granddaughter!

Then I thought, “But she must have been so unhappy. She may need help now.” So, I started including her; and all four of my great grandfathers, too—even though my mother detested the grandfather she grew up with. But was I only going to chant for nice people? No. I’m not always nice myself. I just do the best I can.

There is a story that my first teacher used to tell about a maid who was truly mean. In her entire life, this maid performed only one virtuous act—she gave a meal to a holy person who needed the food. When this woman died, her soul went to the bleak nether regions of the astral plane that she had earned by the way she lived. There was, however, the merit from her one virtuous act—which appeared before her in the form of a huge carrot, ascending toward heaven. The maid caught hold of the carrot, and it started to carry her up. The other souls in hell were thrilled to see this carrot heading for heaven, and they started grabbing onto the maid’s feet and to other people’s feet. Before long, hundreds of souls were being lifted to heaven on the strength of this one good deed.

But the maid was not a generous soul. “What are you doing?” she cried out. “This is my carrot. It was my good deed.” And she started batting away the other people… even though to do that, she had to let go of the carrot.

The carrot went to heaven without any of them. My teacher used to say, “It wouldn’t have hurt her at all. She could have just let the other people come along.”

So, that’s my way of seeing it. I want as many people as possible to ascend on my carrot. I’m inviting everyone who’s interested to come along.