A few months back, I heard inside my mind my teacher’s voice saying, “It’s not the way you think it is.” That’s all. I don’t know what “it” refers to, and so I have no idea how I am thinking about “it.” What I do know is that something I’m depending on to be a certain way is not that way. Since then, a couple of times a day I’ll recall this warning—yes, I think we can call it a warning—and I’ll wonder about it.

I have known for some time that my life is, like the lives of most of humanity, currently in a state of flux. This involves politics, the pandemic, and for me—at seventy-five—the outcomes of age itself. Life is changing in ways I cannot foresee. My next-door neighbor had his sons and few friends over for a barbecue a few months back, and, amid the conversation, I heard one person say, “It’s the end of the world.” It struck me that he was right. The world, as we know it, is ending.

All of this factored into a decision I made around this time to stop drinking alcohol. I am not an alcoholic. My late brother used to say that he and I come from a long line of alcoholics. I think Geoff was right about this; he was clearly a functioning alcoholic himself. However, my own addictive fallout from our challenging childhood manifests in other ways. It is possible for me to have a glass of wine , or two, with dinner each day and leave it at that. I just really like the taste of wine, a good red wine. (Well, not that good; I don’t have the budget for really good wine.)

I had an early experience to pull me away from drinking, shortly after I arrived on Whidbey. Having lived in an ashram for so many years, initially, I felt freed from constraint. I was drinking a glass of wine and watching a movie every night with dinner. After a few months of this, I had a dream in which I was supposed to retrieve a bunch of beets from a pantry. I opened the pantry door and saw a large angry snake, a cobra, coiled around the beets. In the dream, I was nervous, but I knew I could do this. By the end of the dream, I had the beets in hand, and I hadn’t been bitten. Then I woke up and understood that I had just done something terrible. In my spiritual tradition to be bitten by a cobra in a dream means that you will become Self-realized in this lifetime—and I had successfully avoided it. I was horrified! 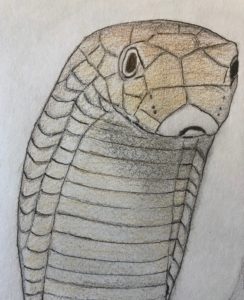 The sketch I made of the snake, who I now saw as Kundalini Shakti.

Certain that the snake in my dream was none other than Kundalini Shakti, the goddess of spiritual transformation who is symbolized in India by a cobra, I pulled out my sketchbook and started drawing this snake I had just seen. As I drew, I was struck by how humble the form of a snake actually is. “You don’t have any arms,” I said to the figure taking form on the page.

I heard a voice inside reply: No, I have no arms. I can’t make you do what I want you to do.

So, I did. For a long time—years—I had a glass of wine only a few times a week. I became aware that wine is an anesthetic, a depressant, a downer, and that I never endeavored anything very interesting with my solitary evenings after drinking wine with dinner.

Then, about three years ago, I broke my back. The pain was, for a time, excruciating and relentless. With all the pills and forms of cannabis I had legal access to, the only thing that gave me relief was—you guessed it—red wine. So, once again I drank wine every night. I think that, following this experience, I was so angry about the pain that I felt entitled to the wine. Of course, I had created the pain myself by ignoring the state of my bones, but that’s another story.

Right now, we’re coming to the end of the world—and my understanding that if there is even a chance it truly is, I do not want to face this threshold with an alcohol-befuddled mind.

It’s been six months now, and in that time instead of roughly two hundred glasses of wine, I’ve drunk three. I enjoyed each of these three glasses of wine tremendously, but I have enjoyed even more the intangible benefits of my restraint. I am now focusing my attention and energy in a different direction.

In this same six months, I have been spending a little more than an hour a day reciting a Sanskrit text, Shri Guru Gita, which has the effect of smoothing out my rough and angry edges—the sparky-ness of my personality—and giving me better emotional balance.

One of the results of this is that my meditations—once an opportunity for me to rise above my emotions—have become auditory. There is a sound, an inner sound, that I hear now whenever I listen for it. I think of it as the sound of silence. When I meditate, I give myself to this sound, and it becomes… not louder but deeper, as if the sound were taking my awareness into the peaceful space from which the sound itself emerges.

I like this a lot. Also, as a bonus, I can now have a moment of meditation at any point in my day. I think this boon has come as a result of both the daily chanting and my cautious approach to wine. So, I would say the result has been worth the effort.

As for “it” not being as I think it is, I’ll just have to wait and see what “it” turns out to be.

One Response to “Rite of Passage”