A Gift from Dad

It can be quite edifying to glimpse oneself from another’s perspective. I don’t often receive such bounty, and when it comes, it may take me some time to welcome it. Today, I remembered my final conversation with my father, our last one-on-one exchange, which took place almost thirty years ago.

This was in 1991, a few months after my father had open-heart surgery. I wasn’t around for the medical drama. I was in India at the time, living in an ashram, and it wasn’t possible to jump on a plane and be at my father’s side. When I got back to the U.S. a few months later, I went to see my parents right away, and only then did I realize just how serious a time this was. My robust, high-color, very-much-alive father was pale gray. When I first saw him, the color of his skin took my breath away. It was as if I were looking at a cadaver. Yet I seemed to be the only one who could see this.

Dad and I both knew that he had very little time left. My mother was in denial. When I tried to hint that her husband could pass on at some point, she balked. I don’t remember how I tried to say this—tact has never been my strong suit—or the specific words of Mom’s reply, but I do recall my certainty that this was dangerous ground, a subject not to be broached. Not with her anyway.

One afternoon, Dad and I were sitting alone on the deck. It was the beginning of spring, and a little chilly, even in the sun. Mom was inside, probably in the kitchen, probably cooking. I told my father that I knew he didn’t approve of what I had done with my adult life. “But because of it,” I told him, “I want you to know that you’re going to be taken care of.”

He nodded. I knew he understood that at least part of my truck with God would come to him when he needed it. Then he said, “You were such a strange child.”

It was true, but neither of my parents had ever said this to me directly. I didn’t say anything in reply. I looked at him intently and waited. I knew there would be more.

“You’d stay in your room for hours,” he said, “all by yourself.” This was true as well. I would read mindless books, little mystery stories with formulaic plots and safe, predictable characters. I would listen to music, or what passed for music among my friends. I’d play the same song again and again and again. I know now that I was numbing myself. I didn’t feel comfortable with the people around me, and I didn’t feel comfortable with myself. Somehow, I never realized that my father had noticed.

“I know that you and your mother have had difficulties,” he said, soldiering on, and at this I felt that I really should say something.

“When did your mother try to kill you?”

It was the summer before the sixth grade, right after we moved to Tulsa. She and I were at the swimming pool, which is where she and my brother, Geoff, and I spent most days that summer. Mom and I’d had a disagreement. I said something dismissive to her. I turned to go down a steep set of concrete stairs, and she pushed me from behind. I felt the push.

Dad listened to my little tale, and then he said, “Your mother never tried to kill you.” I didn’t argue with him. Now that I think about it, I’m certain that this happened but that my mother’s gesture was just the rage of the moment and not some diabolical attempt to end my life. She was probably horrified when I almost fell, catching myself on the bannister at the last minute.

“You may not know this,” Dad said, “but your mother loves you. And if something happens to me…” He paused then, and for a moment we shared a look.

Then he said it again: “Every week!”

As I think about it, this was the most important conversation I ever had with my father, much more significant than the one where he made me promise to go to college, certainly more meaningful to me than the one where he told me that now it was time for me to find a husband. I accomplished all of the tasks Dad set out for me, but this, the last one, was the one that mattered most.

My father did leave us a couple of months later, and I started, then, reaching out to my mother—calling her every week and writing to her as well. She liked the letters, she said, because she could go back to them whenever she wanted to; she could reread parts of them. I spent my vacations with her, and when it was time for her to move into progressively smaller homes, I helped her do that, too. I got rid of furniture that didn’t fit, arranged the furniture that did; I hung paintings and organized spices. I sat with my mom and watched sappy love stories from the forties and fifties, her with her vodka and me with a companionable glass of wine. It was by my steady reaching out to my mother and, after her death, to my brother that I forged a bond to my family of birth.

After my brother died, the next time I meditated, I heard him say to me, I never knew… and by this I think he meant that he never before knew how much I had to contend with in my own mind. Then he said, You just kept coming. 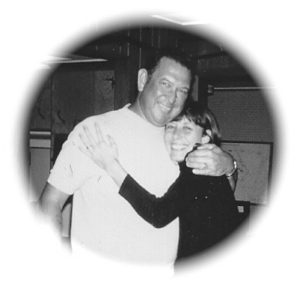