On an impulse, I asked a friend who had stopped by for chai one morning what she would change in my living room if she could. Eva hesitated—as any intelligent person would do in that situation. “I really mean it,” I told her. “I may not do what you suggest, but I would love to know what you’d tell me.”

“Well, as a matter of fact,” Eva said, “it seems to me that those four paintings are fighting with each other…”

A half-hour later, I was so glad I had asked. Eva suggested changing the 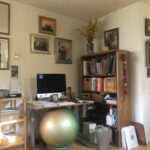 placement of just three paintings, and the difference this makes in the room is breathtaking. There is now space in two places that needed space, and the result is that the paintings appear to flow across the walls. One small, intense piece is in a spot I never would have imagined for it, and a large gold-framed painting of my own is back in my bedroom, where it belongs—and where it looks perfect.

My first thought was that the value of an artist’s eye is unimaginable, but as I consider this further, I think it’s more to the point to say that what cannot be imagined is the value of our friends.

That afternoon I had a Zoom conversation with my friend of longest standing. I had to think of how to put that because Pat is not my oldest friend; what she is, is the only friend I’ve known since the sixth grade. We were both new in the school that year. We didn’t connect with each other then, but the following summer our families both moved to another neighborhood, where we were two blocks apart, and at that point Pat and I began to bond. For years, we hung out at each other’s houses. We were maid- and matron-of-honor in each other’s weddings, and we’ve kept loose track of one another in the years since. It’s always a joy to talk with her. Now, she’s the only friend I have who knew my brother, Geoff, and who also knows that he had a daughter, Heather.

Pat asked about Heather, and after a while I was telling her that Heather was the daughter my mother had always wanted—“She’s little and cute,” I said; “she’s sparkly.” Because Pat knew my mother, she understood.

When she learned that I hadn’t been in touch with my niece recently, Pat said, “You should write to her. Family is so important.”

That was how it happened that, for the second time that day, I followed some excellent advice from a friend. I emailed Heather even though I didn’t feel I had anything special to say. I simply told her that I often think about her. Heather wrote back to say, “I think about you a lot, too.” Her words warmed me.

These threads of love knit us together in a way that I find unutterably beautiful. We’re all individual creations, pieces of art. We have somehow arranged our lives so that there is a great deal space between us, but the flow—the connections—are the very heart of life itself. They’re what matter.