I do like Christmastime, and I hate to admit it, but I think part of the reason has to do with the lights, the sparkle, the surfeit of cookies and candy, and all those wrapped presents. My favorite image from Christmas is the tree with presents around it.

My experience has almost always been that the gifts themselves are bittersweet—not quite right, if you know what I mean. I don’t think I’ve ever unwrapped a Christmas gift and been utterly thrilled by it—but I am happy to see presents in their paper and ribbons, and I love to wrap the gifts I give other people. It’s an art form, which at the least half the time I create with paper and ribbons salvaged from earlier gifts. Something happens in the wrapping of a gift. A simple expression of one’s affection becomes… a mystery, a sparkling symbol of the season, a sign that this person is loved.

My mother had a real thing about having a lot of gifts under the Christmas tree. Money was always tight in our house, but Christmas had to be big. My senior year of high school, when we were shopping for school clothes in September, I absolutely loved a particular jacket called a car coat. It was stylish and cool… the coat that everyone at school would be wearing. My mother said, “I’ll buy it for you, but it has to be a Christmas gift.”

“No,” she said, “because then, when Christmas comes, you’ll forget. The car coat will be old then. You’ll have been wearing for months. And you’ll feel badly that you aren’t getting enough for Christmas.”

So, for four months the car coat sat in my mother’s closet. It was then duly wrapped and put under the Christmas tree, and I wore it to school in January—when that very car coat was on sale for a fraction of what it had cost in September and when, truthfully, at school it was no longer considered “in.”

With a history like that, you’d think I’d despise Christmas gifts, but no. Perhaps I’ve become my mother. I like wrapping the gifts, having the wrapped gifts sitting out.

My brother was the same way. After Mom died, I spent a few Christmases with Geoff and his family, and one year, I realized that he and his wife had wrapped underwear—not special underwear, just underwear that they were going to get for themselves anyway—and put it under the tree with their names on it. “It’s nice to have a lot of presents under the tree,” Geoff said. He wasn’t even embarrassed. Why would he be? He was raised by the same mother I was.

I will say that my focus long ago shifted. Almost nobody is coming into my house in this year of social distancing, so the presents I’ve wrapped and have sitting around my tree are not for show. And they’re certainly not presents for me. Truly, I no longer think of Christmas as time to receive gifts. It is a time to give—and the wrapped gifts that sit around the tiny tree on my dining room table give me enormous pleasure because they’re a sign that I’ve grown up, that I have a family of my own—my friends—and that within my always-somewhat-limited resources, I can create shine and sparkle and mystery to share.

Absolutely the best gift I gave this Christmas was to Mira, the Siamese-and-something cat who is now living with me. She is named after a 16th-century Rajasthani princess, a poet-saint who is celebrated for the ecstatic love-songs she sang to Lord Krishna. Our Mira has not manifested this particular trait, but she does sit in my lap purring while I recite holy texts, and I take this as a sign of her potential for elevated consciousness.

I couldn’t help but notice, however, that this cat was actively seeking elevation of another kind. She liked to jump from my computer desk to the top of a five-foot bookshelf in the living room, switching her elegant tail in front of a picture of my Guru that hangs there. Once she leapt—I know not how—to the top of the seven-foot bookshelf in my bedroom and knocked to the floor the stuffed animals on display. 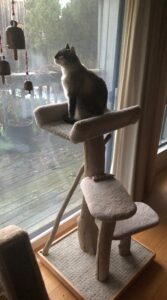 I decided that what Mira needed was her own seat, and one day last week, on a whim, I went to a sort of pet emporium just north of Freeland and purchased a four-foot-high contraption fashioned by a local artisan from Whidbey Island driftwood. This piece involves two stable steps to an upholstered perch, where Mira now pretty much lives. It took her a day to try it out—as sometimes happens with gifts—but once she’d achieved that penthouse level, she clearly knew that this was her place.

I have seen friends enjoy, and sometimes even cherish, gifts I’ve given them. But I have never before had the satisfaction of watching someone inhabit their gift. It was as if I had bought Mira a home. I found the experience quite fulfilling.

It reminded me of a conversation I had some three decades ago with a Hawaiian kapuna, an “elder”—who was probably the age I am now—about the nature of aloha, which in its broadest sense, means “love.” This woman said, “If I give you a papaya, it isn’t that I wouldn’t enjoy eating that papaya myself. I would enjoy it. I like papaya.” She paused. “But I would take a greater joy in your joy.”

So, that’s my new understanding of the Christmas spirit—it’s about the greater joy of giving.